So, first of all I was looking to buy a Cayman GTS but wanted the newer model for the better cabin. Problem was the sound of the engine, the engine was great but sounded pretty poor. Also was in first lock down and prices were through the roof.
So, changed to a 911 but wanted the .2 for the turbo engine for the torque. Found one in the colour I wanted (lava orange, really rare) at a local Aston dealership but the condition was shocking for a "showroom ready" car, they were also asking £10k over Porsche dealership prices

Time went on and realised that our parents weren't getting any younger, and having a 2 seater car probably wasn't a good idea.
So, Macan or Cayenne? Cayenne is a biiiiig car so went for a Macan. This time I wanted Mamba green (brave and rare), think you can find a "Gen2" Turbo in that colour, nope, not a chance. So thought sod it, we'll go for Red or Blue. 2nd hand prices were £1k below a new build and as usual the options on Porsche mean you very rarely find one with the exact spec you want.
The wife has been working from home since March 2020 and I have a works van so weren't in a huge rush for a car, you couldn't bloody go anywhere anyway, so new build here we come.
That almost took a bad turn, build slots for either GTS and Turbo models were difficult to get hold of. I tried about 6 dealerships in all from Portsmouth to Perth, then luckily my local dealer found one but build slot was shutting in a matter of days. Got the spec sorted and then just had to wait for the call that it was ready.
We'll, get your sunglasses ready 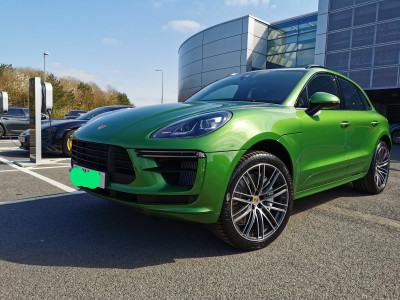 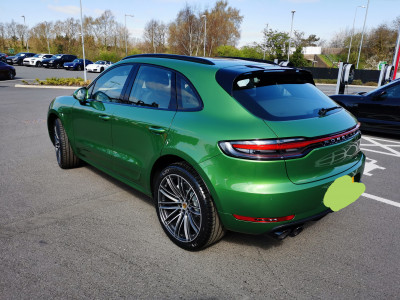 And now at home sitting in the garage - Had to get the inserts for the key Only drove it back from the dealer on pick up day, been too busy with work and doing the house up to drive it. Fingers crossed it has an outing this weekend!

Going to take it steady on the engine for a while. Seems most keep it below 4k for a few k miles, will see how that goes.

It sounds nowhere near as good as the RS6 did, but the gearbox is just amazing. You can't feel the gear changes at all when cruising, and it shifts so quick in manual.

Still miss the RS6, was a stunning car, but we fancied a change and after having bam_bam go on about Porsche all the time me and the wife thought, might as well do it while we can.
So, in a way, thanks bam (you're still a c-unit though).
And if you read this Shopp, bam is going to email you at some point, he's just too bust being ghey and moaning about having to look after his children

Nice. Do like a Macan. Wife on her second, third not too far away, facelift arriving shortly so waiting for this.

If you don't know where you're going, any road will take you there!
Top
Post Reply
5 posts • Page 1 of 1

Users browsing this forum: No registered users and 3 guests