I bet that was a fingers crossed moment when you came to start it after going back together!

Thanks for the comments guys - its really not that bad, there's nothing complex in it - its just a big job
This probably took me about 40 Hrs on and off to get out, which sounds a long time but thats with a fair bit of just looking at it and pondering and photographing every stage, I lost count of how many times I charged the camera! and you should factor in at least 20 cuppas

To put it in perspective I can get the engine and box out of my chevy pick up in about 4 hrs but theres sh##t loads of room in that engine bay!

I also have a list of parts you will need just for removal and refit of this (fluids, bolts, seals) -its an expensive task in itself, I will dig that out later
Top

Excellent job. The hard bit will be putting it all back together.
Top

I'm part way through the task at the moment, working a couple of hours each evening and a day or so at weekends. Most of my time seems to be spent looking at it thinking "I can see it but how on earth do I get a tool on it?" which means a 2 hour evening is usually about 10 minutes work. Still, it is allowing me to buy more tools without too much protest from my other half - looks like a set of thin wall and a set of shallow sockets might come in useful so they're next on the list.
Despite the car having been reasonably well cared for prior to my ownership, from what I'm finding it looks like in 110K miles and 8 years it's not had anything done previously that required the engine dropping. Having said that, I've so far got away with one sheared bolt, a stripped out star head and having to cut through the clips on both front exhaust sleeves.

If the weather is reasonable this weekend I'll be moving on to the engine looms.
Top

great work... wish i had more time on my disposal to strip mine.

Rather than start a new thread that'll duplicate a lot of what's already here I'm being presumptuous and adding a little.
The wiper scuttle panel doesn't come out because it's stuck in by years of grit, wax and whatever the car has been washed with: 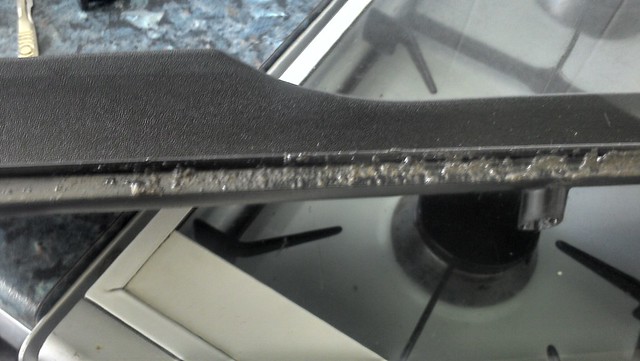 And, it comes out UPWARDS next to the screen. To release it you need to get some lubrication in the gap between the plastic and the rubber at the base of the screen - a fine screwdriver run carefully along the gap helps work it in and remove some of the (for want of a better word) mud. Then it helps to have an assistant and to work very carefully. Starting at one end (I chose the left as I had more elbow room) have your assistant pull the panel forwards horizontally towards the front of the car. They won't move it more than a fraction at best but it'll widen the gap. Then with a wide but thin prising tool and something to spread the load on the screen (very important unless you want to pay for a new screen) insert the prising tool in the gap between the plastic and the rubber at the far end of the panel and lever upwards gently. The panel should release (I won't say 'pop up' because it won't) and you can then work your way slowly further along. Eventually enough of the panel will be free so you can grab it and release the rest of it. Removing it completely is a case of flexing it a bit to get it past the wiper spindles and bonnet hinges.

Oh, and don't attempt the job in a high wind as the bonnet WILL come down on your head a number of times.
Top

Why are you cooking it on the hob?
No matter where you go, there you are.
Top

'cos it was the only flat surface in the house not littered with parts or tools.
Top

Furry muff.
No matter where you go, there you are.
Top

Not exactly the response from my other half. Luckily for my continued possession of certain parts of my anatomy, circumstances (not the least of which is that I have more project cars than Daft Mick) dictate that we have our own places so the only comments so far have been "Holy hell" and pointed questions as to how long I think the job will take.
Well I had a good day on it today and reckon that a few more hours will see it ready for the engine to come out.
Top

So, only the gearbox cable left I think. Everything else is a couple of minutes work - the ecus will be bubble wrapped and strapped to the inlet manifold before I move anything. 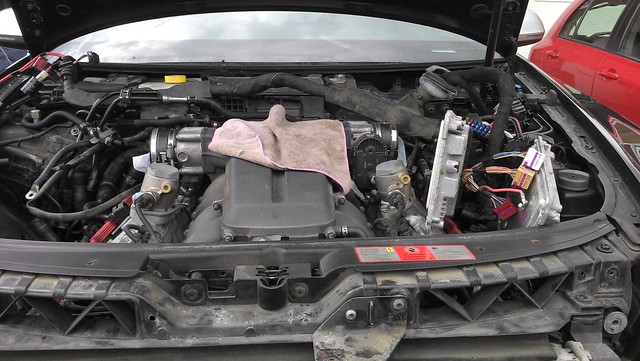 However, a massive black cloud, spots of rain and rumbles of thunder mean that's as far I can go until Tuesday.
Top

So Tuesday it was strip this, strip that, remove gearbox cable, remove all but 3 down pipe nuts - 2 because I couldn't reach them and one because it was solid.
Today: 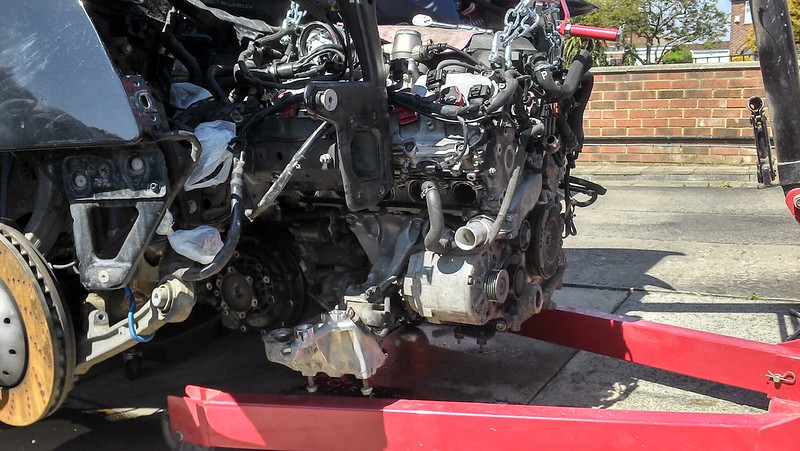 That was as far as I could pull the engine forwards due to a lack of space. You'll notice that this pic was after I'd got the turbos off, which leads me on to this pool of oil which came out of the back of the rh turbo 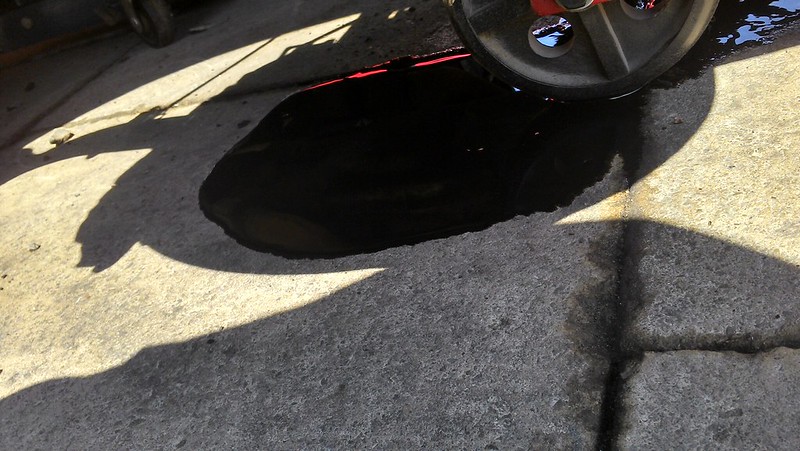 the inside of which is a tat oily... 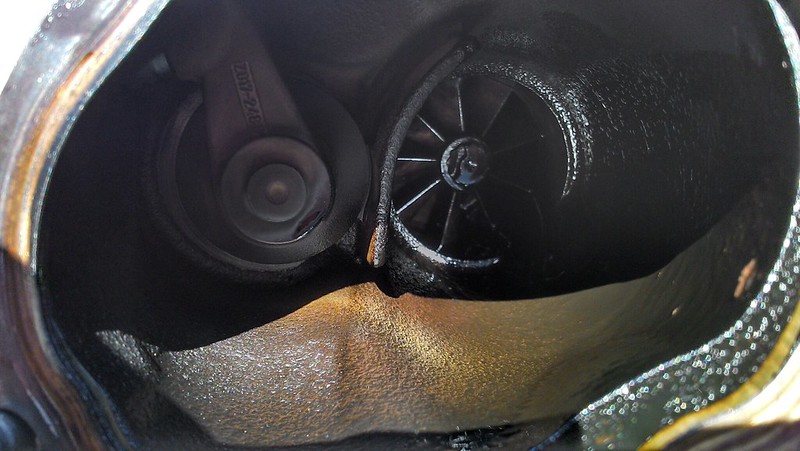 and even more oil drained out later from both of them. This is not oil from the turbo drains, it's from the insides of them, as you can see from the the outlet of the rh turbo 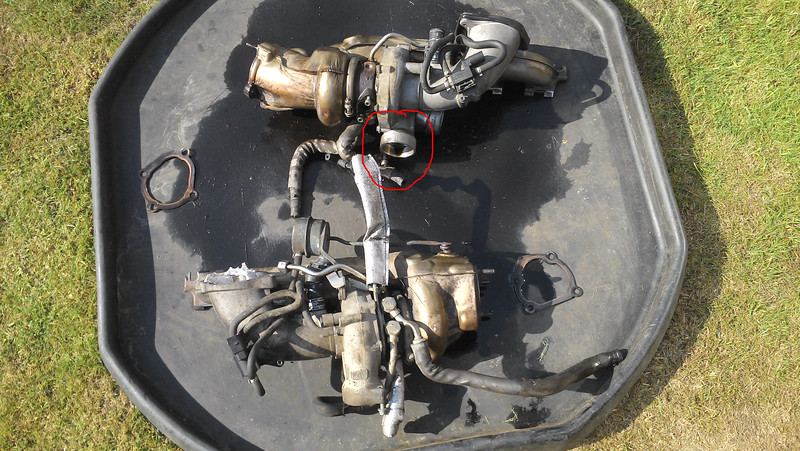 There's more float in the rh turbo than the left, enough to see (and hear). I can push the shaft across enough for the blades to touch the housing. It's difficult to measure, but with the shaft pulled across I can easily get a 0.38 feeler gauge between the blade and the housing.
Top

Nice job; we need more engines out on the drive - come on guys get your spanners out......

And thats a nice oil tray, I could do with one of those.....
Top
Post Reply
95 posts

Users browsing this forum: No registered users and 4 guests

All logos and trademarks in this site are property of their respective owners. © 2002-2019 by RS246 Limited. All Rights Reserved