I got my ’08 RS4 five months ago, and I installed LED daytime running lights along with big power resistors to fool the diagnostics into thinking that regular bulbs were still present. Now….fast forward a few months, and I’ve obtained European headlights to replace the originals, which are full of moisture. I couldn’t bring myself to splice into the wires in my nice new headlights, so I decided to look for a way to fix the problem at the source - and succeeded. Since I do a lot more reading than posting in forums like this, I figured it was high time I shared. I think I’ve included everything here that you need to know to repeat what I’ve done. It worked on my RS4, but I’m assuming that it’ll also work on the B7 A4 or S4, provided that they all use the same BCM - which I think they do.

Body Control Module - 8E0907279N
In the repair manual, this is called the “Vehicle Electrical Control System Module”, but it’s more commonly Called the Body Control Module or BCM. This black box manages power to lots of stuff in the car, including all of the critical lighting. You can modify the one you have already, or you can get another one. The thing is almost $1k from Audi, but I got one on Ebay for $25, and it worked just fine. I wasn’t sure if was going to wreck my BCM in the process of figuring this out, so I wanted an extra. I believe the BCM is the same for the B7 A4/S4/RS4, but I haven’t confirmed that. 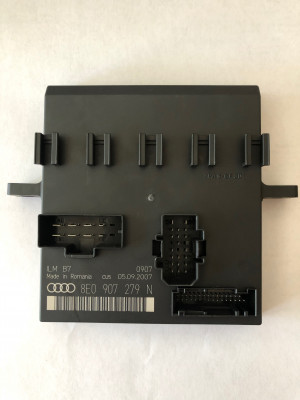 LED DRL Bulb
I got mine from Amazon, and there are lots of options. I used these:
https://www.amazon.com/gp/product/B07QG8WN9C/

Here’s how it works: The DRLs are each driven by an Infineon BTS6143D smart switch. The switch sources a sense current - that’s somewhat proportional to the load current - into a 3kohm resistor. This generates a voltage that the BCM measures to see if the DRLs are drawing enough current to look like good bulbs. Increasing that sense resistor makes the load current look larger. I measured the current draw of my LED DRLs at 165mA. The actual bulb current is more like 1.9A, so replacing the 3kohm resistor with 30kohm makes the LED “bulb” look like an incandescent to the BCM.

First, you have to get to the BCM. It’s to the lower left of the steering column, behind the “driver’s storage compartment”: 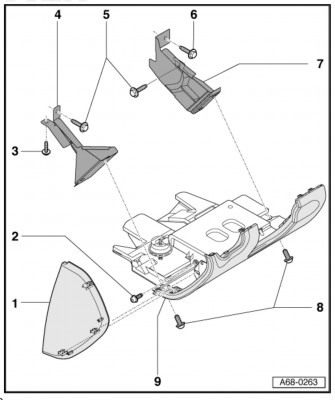 You have to remove the instrument panel cover (1), and screws (2) and (8) to get the compartment (9) off of the dash. You do NOT need to remove the supports (4) and (7). Now you’ll see the BCM down to the left of the steering column: There are two nuts holding the BCM in place, and you’ll need to remove the fuse block to get to the one on the left. The connector are fairly straightforward to remove, and you can disconnect them without removing the BCM if you want to test a second one before fully removing the first. 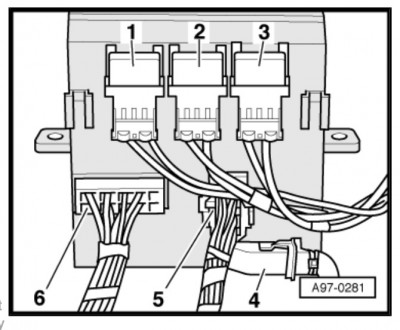 (6) has one latch that you squeeze while pulling, (5) has two latches, and (4) requires that you depress a locking tab and pull up the orange lever to pop the connector out. The fuse blocks attached to the BCM (1, 2, 3) are a bigger pain. They slide off in the “upwards” direction in the picture, but you have to push down a latch beneath them from the “downward” side to release them. You’ll see the latches if you look in there, and there’s enough slack in the fuse block wiring to turn the BCM around and get to them.

Once the BCM is out, remove the four screws in the back and take it apart to get to the circuit board inside: 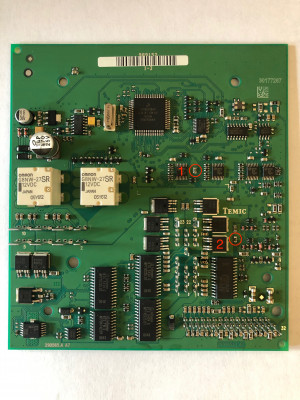 The two resistors you’re replacing are circled in the picture (you'll have to zoom in). (1) is for the left DRL, and (2) is for the right DRL. You’ll need a fairly small soldering iron and some small solder. Surface mount soldering is outside of the scope of this post, so I’ll just say: replace those two resistors with 30.1kohm resistors. I picked that value because it was a simply 10x the original, but it isn’t super critical. If you have something a little bigger around, it should be fine. I spent a good bit of time deciphering the Audi wiring diagram and probing around the board on the bench and while it was powered in the car in order to determine that these resistors were definitely what I was looking for.

Put the BCM back together, reinstall it, and LED DRLs should work without any error messages.

My original post included part of the modification necessary to make LED parking lights work, but now that I got them in there and tested it out, I found that there was another step.

I ended up replacing two resistors: I replaced (1) with 10kohm, and (2) with 30.1kohm. Note that (1) is the lower resistor of the two shown near my red oval, and (2) is the middle resistor in the group of three near its oval. Since these two sense resistors are shared with other loads, besides the parking lights, I sort of guessed at what would be reasonable values. So far, this modification has worked - both parking lights turn on and stay on, and I don't get any error codes. I used these LEDs: https://www.amazon.com/gp/product/B07DTD4Q3R/.

These resistors are physically smaller than the ones used for the DRL sense lines - they're 0605, rather than 0805. 0605 is sort of a weird size, so I just used 0603s - which fit no problem. Here are some examples:

Based on the wiring diagrams, I believe that resistor (1) is shared with the license plate bulbs, so it's possible that changing it as I suggest here will also allow you to swap out your license plate bulbs for LEDs. I haven't tried, but at worst it may just require a higher value resistor. Resistor (2) is shared with the high-mount brake lights, which are already LEDs.

As with the mod for the DRLs, this works in my '08 North American RS4, but I don't know if it will work in Europe, since there's a variation in the wiring diagram that definitely doesn't represent my RS4 (I verified my connections with a multimeter and lots of wire). However, if the European cars are represented by the other variant in the diagram, then it's possible that only changing resistor (1) will allow both parking lights to work with LEDs.

Based on the wiring diagram and some probing around the BCM circuit board, I believe I've identified the two resistors that should be replaced to allow for LED fog lights:

They're both currently 3kohm, so I'm guessing that replacing them with 30.1kohm (as was done with the DRLs) will do the trick. I don't plan on making this modification myself, at the moment, so please add to this thread if you learn that this modification works.
Last edited by dr.electron on Sat Mar 27, 2021 10:39 pm, edited 7 times in total.
Top

WoW !! .Well done for having an indepth look into this . Does this BCM control the rear number plate lights from here aswell ?
They seem to cause issues too when swapping to Leds bulbs .
Top

Great write up and nice work finding out the requirements for this!

Now, if only my soldering skills were good enough to undertake this......

dhali wrote:WoW !! .Well done for having an indepth look into this . Does this BCM control the rear number plate lights from here aswell ?
They seem to cause issues too when swapping to Leds bulbs .

Yes - it does control the license plate bulbs. And the reverse lights, which are another common LED upgrade. This same modification strategy would apply to all of those. I'd just need to poke around a bit to figure out which resistors to change.
Top

It's worth noting that while the DRL connectivity appears to be consistent throughout the 1000+ GPS of wiring diagrams I have, the parking light connectivity varies. I think the difference is in the Avant, or North America vs the rest of the world - I'm not sure. I haven't yet figured out exactly which pages apply to which car, so I'm basing my 10k resistor change on my own logical conclusions based on what I've determined about the circuit board layout.

The license plate and reverse light wiring vary as well, and I haven't been able to find any logic in how the circuit board is connected that helps clear it up for me. But I'll keep tinkering. If anybody knows how to decipher the wiring diagram so that I can figure out which pages apply to which variant, I'm certainly interested. I just downloaded the entire A4-series diagram from Erwin awhile back. It's huge.
Top

Do you still get a bulb out warning when one of the DRLs fails ie. have you checked by removing one of the bulbs?

dhali wrote:WoW !! .Well done for having an indepth look into this . Does this BCM control the rear number plate lights from here aswell ?
They seem to cause issues too when swapping to Leds bulbs .

Yes - it does control the license plate bulbs. And the reverse lights, which are another common LED upgrade. This same modification strategy would apply to all of those. I'd just need to poke around a bit to figure out which resistors to change.

That would be great .
Top

I haven't tried - but I'm assuming that it will still let you know if one dies completely. All I've done is make the load look bigger than it is - but 10 x zero is still zero.
Top

I really like this. Eventually someone that can find a solution. Follows this. And will deffo perform part 1!

Excellent write-up, just picked a module up for £13 and ordered 100 resistors because having 2 sent over just didn't make sense.

Excellent. Do let me know if others have success with this, so I'll know that I didn't just get luck somehow. I've been running with DRLs this way for a month so far, and no problems. I'll be changing out the parking lights some time in the next couple of weeks, and will report on whether that portion of the mod worked.
Top

Great write up, and very well explained. My licence plate LED's have been faultless with the EM Tuning ones and I'm now awaiting someone finally sussing out the reversing lights for LED's.
Top

So any update on this? Everything work fine and no errors or hidden errors? Can it cause any problems with other stuff due to it being a canbus system?
Top

I've been running with this modification and LED DRLs since I made the original post, and haven't ever seen any errors on the dash. So nothing about driving or using the car has been any different. If I run a VCDS scan, I get the fault "01794 - Control Module - Incorrect Chassis (VIN) Number " - which makes sense because I replaced my body control module with one from Ebay. If I were to go back and modify the original and use it, the fault would go away. But I'll probably never do that since it has no effect on my use of the car, and if I sell the car someday, I want to be able to provide the original control module. I haven't looked into writing a new VIN to the control module, so that might be possible.

I finally got my new headlights and put LEDs in for both the DRLS and parking lights (city lights?). I'll get those install sometime in the next couple of weeks and see if my parking light mod worked, as well.
Top

Users browsing this forum: No registered users and 35 guests