So, the day finally arrived and I collected my Vorsprung today from Cambridge Audi. It has had PPF applied to the whole car and then topped off with G-Techniq Halo and the interior protected etc (not by the dealer, I used a separate company who transported it in a covered trailer from the dealers PDI center, then to the dealer ahead of me collecting).

First impressions, I love the color. The Sebring Black has a blue / purple tinge in bright light and looks like a deep black in dull light. Reminders me of BMW Carbon black I had on a 5 series years ago. Is very stealth in Vorsprung and black with the black badges etc. Would I have preferred the gloss black wheels, maybe, but the titanium ones don't look too bad and the dealer said they can always powder coat the ones on it at a later stage if I wanted.

The interior and technology is light years ahead of my C7. Its going to take some getting used to as you can change so much. This includes deciding if you want fragrance pumped into the cabin from the air con, how much, and 2 different ones to choose from. Needless to say that is currently turned off. The touch screen is actually really good, responsive and having played with it for a while fairly intuitive.

However there are layers of options in options I've not even gone near yet so its going to take some fiddling. Coming from a Range Rover Sport SVR (which made its own mind up as to if or when it would turn on, depending on the day) its quick, clear and if you have had an Audi before most of the menus will be familiar. The touch screen does get lots of marks on it....and Audi are aware of this as you get a specific cloth with the car to wipe it clean.

The wheels are huge, and look good. I still think it looks bloody massive. The dealers C8 launch edition in Nardo was sat next to a C7 performance in Nardo, and the size difference is easy to see.

Really easy to get comfy in, seats very comfortable and supportive and didn't take me long to get comfy before driving it out. First impressions on driving are its fast, definitely feels faster than my C7 Performance did, but in a different way. The biggest difference is torque. You can feel the difference to the C7 and it feels like it has got a fair bit more. In gear acceleration is quick, and effortless. While I have been taking it easy (done about 80 miles), on the road it doesn't lack at all in the performance stakes. Even though its a big motor, it feels as swift as my Aston. There were a couple of moments accelerating down a couple of motorway slip roads when I found myself looking down and realizing I was well into licence loosing territory but it not feeling anything like it.

When driving it, it feels much smaller than it looks or when you first get in, and I think that is down to the 4 wheel steering. It feels much more nimble than it looks and turns in well and has a much smaller turning circle than you think. I've not had much chance to take it down anything super tight winding roads at the moment, and am taking it easy on the brakes and tyres. I have the suspension in comfort at the moment, and even though it isn't on air suspension, it didn't crash, and soaked up the bumps while cruising effortlessly on the motorway.

So onto my one niggle.....its quiet. It has a much deeper rumble than the C7 but never gets that loud. Even with the valves open, so far there has been no sign of pops and crackles, which to some may be a little OTT but I quite like it occasionally. My C7 was louder and sounded more raw and my SVR which the RS6 replaces was ridiculous. Dont get me wrong, stick your boot down and there is noise, but sometimes just not enough. I will definitely be getting the exhaust changed asap, the question is Akrapovic or Millet (both I think are still developing their C8 exhausts)

So my first days impression. I really do like it. Do I love it yet, not sure. But I think it will get better the more I drive it. I loved my C7, and to me, it is a very different car to that. More refined, better technology, and definitely quicker....but not as raw. However i am not disappointed with it in any way.

Couple of pictures, but the handover room was the size of a match box and the weather today has been pants, so ill try and take a couple more when we finally have some sun! 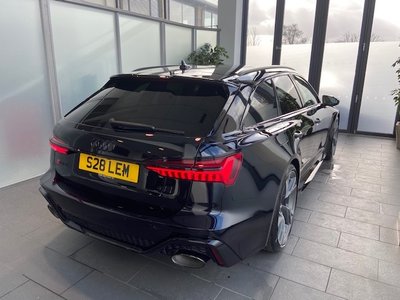 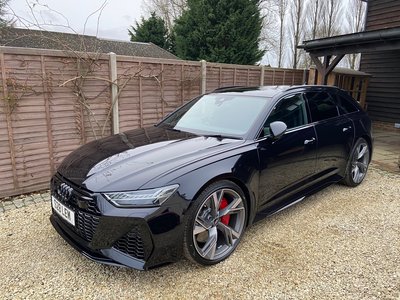 Well done on the pick up. It certainly looks a beast. Good thinking on the full wrap, it will help to look after the paint.
How much bigger is it than the C7? I have been thinking about a C7 or waiting for a C8 but the C7 would tight in my garage. So the C8 maybe wouldn't go in!

Nice write up and congrats. Enjoy it.

Miltek I believe already have their exhaust ready but Akrapovic haven’t done a car yet. I am also waiting for the news on exhausts as I agree with you. It’s very quiet in standard form even with the valves open.
Top

Or how about a Tubi?

Does your car have the Sports Exhaust option?


Or how about a Tubi?


Not even thought about tubi. Will see what options they have in particular what tips. Had a Milltek on my RS4 which sounded good, but mixed views on here about build quality?

I’m also not sure how long the Akrapovic will take to come out. And while I’m not in a super rush, the car does need a better sound to pacify my desire for the odd pop and crackle!
Current:
2020 RS6 Vorsprung - Sebring Black
2019 Aston Martin Vantage - Hyper Red
911 Turbo S on order - due May 2021 (hopefully!)


Sent from my iPhone using Tapatalk


Or how about a Tubi?


Not even thought about tubi. Will see what options they have in particular what tips. Had a Milltek on my RS4 which sounded good, but mixed views on here about build quality?

I’m also not sure how long the Akrapovic will take to come out. And while I’m not in a super rush, the car does need a better sound to pacify my desire for the odd pop and crackle!

Not had a problem with the Milltek 3 years later. I have heard the build quality is not as good as some but you can't compare it to something like the Akrapovik costing 3 times the price.

I've heard that about milltek too and whilst it may not look as new as some others after a few months of use does it really matter for the 3 years or so it will be under there? Only problem I had with the one on my C7 was a slight knock against the body over bumps but just needed a slight adjustment to fix and the valves would chatter so needed the odd spray of lube.
I had a Tubi on my B7. My god that was loud but I was using it in a slightly different (louder) configuration than it was intended.
Top

It looks lovely, great colour just hope you don't have a knock as the special finish paint is a nightmare. I think the exhaust is something I could live with in my daily, beginning to find the crackles and pops a bit boy racer on my PE and the last time I went after market (Milltek) the motorway drone/boom became a pain, but each to their own. I am disappointed that Audi didn't reign in the dimensions, I have the garage room but live in a part of the world where the roads are tight and parking spaces narrow, it just looks so wide that I'm not sure it would really work as a daily driver for me. Nice write up and good to hear that you're happy.
Top

Not in stock now until end of March ish (with black tips). Akrapovic have confirmed theirs wont be ready for another 2-3 months. And not heard back from Tubi yet.

Take the point on the Milltek and the fact I wont even see it, and to be fair I have already had one. No doubt the Akrapovic will be mega expensive, and will depend on what the tip option is.

Not sure yet which way to go. I want louder...but not too loud. Maybe a bit more research needed, in some ways I am given a level of comfort that Akrapovic was a 'semi official' approved part by Audi on the C7 however, not sure main dealers would void warranty just for an exhaust (always a worry when the car is new)
Current:
2020 RS6 Vorsprung - Sebring Black
2019 Aston Martin Vantage - Hyper Red
911 Turbo S on order - due May 2021 (hopefully!)

This may be a good step approach option. Any ideas where people had this done? Could maybe try this for little expenditure and see how it sounds, then progress if needed!
Current:
2020 RS6 Vorsprung - Sebring Black
2019 Aston Martin Vantage - Hyper Red
911 Turbo S on order - due May 2021 (hopefully!)

GPF is the issue, there’s only going to be so much you can do.
Top
Post Reply
46 posts