Should I move to an RS4 from S4 avant?

Should I move to an RS4 from S4 avant?

Hi new to the board

For the past year I have owned a 2015 B8.5 S4 avant, sepang blue with the rare rear sports diff option.
As of late I’ve been considering moving to an RS4, but need a bit of advice to help me with uncertainties.

#1 The first owner of my S4 got 4 year extended warranty which is about to run out, so I’m now thinking should I tune it to an MRC stage 2 and potentially be at similar/better performance than an RS4?

#2 The second slight worry is the theft level will increase, as my s4 isn’t as desired (It also came debaged so a little more stealthed) I do use a steering lock and if I was to get an RS4 I’d also get a removable bollard for the driveway.

#4 WHY? They just look bloody great, made the mistake of parking my s4 next to an rs4 when having a butchers at a dealership and it gave me massive envy complex

(there was also an rs6 C7 next to that, by god them arches are mental!!)

Other than my uncertainties my main question is really the financial side of things, how do most go about affording the £50k+ price tags?

Thanks in advance for any help

This is all you need to make the change! 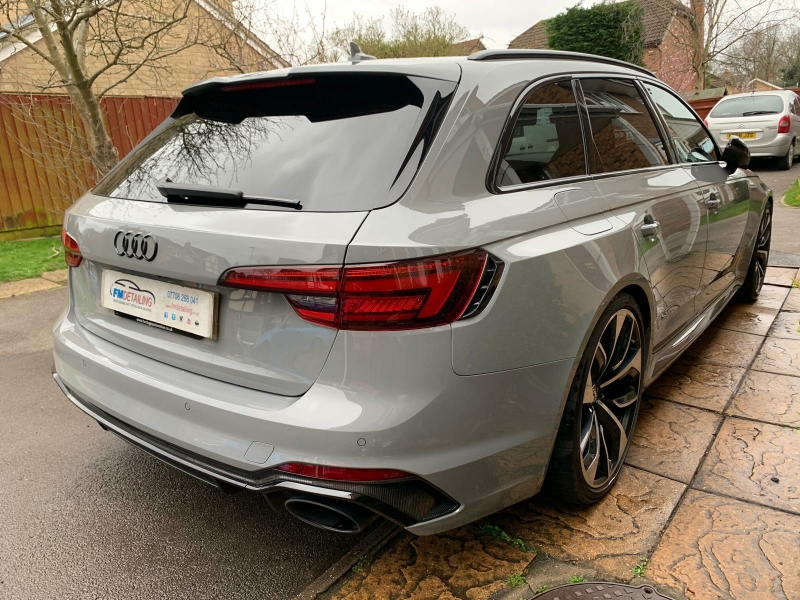 Sent from my BBB100-2 using Tapatalk

Hahaha what a beast defo need the black pack!!!

Honestly I should have taken a photo but the RS4 & RS6 were sepang blue too. Made my S4 look like an allroad!! Even though on its own I always thought it looked great :’(

When in 2017 did they start arriving? because was thinking that there would be more of that year on auto trader but there’s only one and all the others haven’t taken most of their depreciation yet to lower the price to a slightly more palatable price range. Thinking maybe the cars that were pcp’ed/leased would start showing up.
Top

should I look at b8.5 instead or what would be alternate options?

should I look at b8.5 instead or what would be alternate options?

A B8.5 RS4 will feel underwhelming in comparison to the shove of your S4. They have plenty of power up the rev range, but you have to work harder for it (they're a good looking car though)
A B9 Rs4 is significantly quicker in any scenario than any of the V8 models


I can second this as i have just moved for a B8.5 to the B9 and while the B8 is a great car, this new one is in a different league IMHO

Hi, you have the same thoughts as I had before buying a B9 RS4. Back in 2011 I bought a new B8 S4 Avant and specced an additional £11k options. £51K S4 and I loved it. I got the 5 year warranty because of the sheer amount of expensive equipment on the car that could end up costing a lot of money, in fact I extended the warranty up to 7.5 years until The car went. I could afford £250 excess but not a £3K bill for replacing both rear half shafts and seals that happened in the 6th year for example, so I think the £470 yearly warranty cost beyond the 5 years was well worth it. My RS4 now has 4 years warranty and I will be extending this too.

I always wanted the RS4 but couldn’t afford to buy or run one, or so I thought. After 3 years I had the S4 Revo stage 1 tuned with the DSG mod- £1200 amazing difference. At 4 years I went stage 1+ which was another big difference in power and torque, similar to the B8 RS4, but without the running costs. The brakes were the biggest letdown and although I never suffered brake fade, they did get too hot for my liking when pushing on in the Italian Dolomites, so much so that I stopped to let things cool down (nothing to do with the Revo tuning, but no cooling and pretty standard brakes).

Although the car was great to drive, didn’t look too special and had reasonable running/servicing costs, it was becoming dated in the electronics user interface, I.e. on the AMI you couldn’t stream music via Bluetooth without using a BT dongal and then had no MMI control over it, plus other modern day things that even my fathers Škoda has like Airplay, stop/start cruise control etc.I had adaptive Cruise control which would slow to 12 mph, but technology has moved on.

I was content to keep it for 10 years or more until it was stolen in 2019 when it was 7.5 years old. I do believe it an opportunist and not targeted, but I won’t go into details.

I went to replace it with a 2018 B9 S4 Avant. However sitting next to the car I went to look at was a 9 month old fully loaded low mileage RS4. My head is telling me S4 but my heart wants the RS4. Just looking at the two cars from the outside is enough to make you decide. The S4 looks bland compared to the RS4, the RS4 looks like a mean stealth fighter jet and has a nice bark.

It was a no brainier, I had to find a way to purchase the RS4, this for me was a once in a lifetime (I am 53) shot at my dream car. I knew everything there was to know about it since I had watched lots of YouTube videos since it’s launch. It is the car I really wanted.

I bought the car on PCP because that was approved and I had the cash in 2 days. After getting the car, I remortgaged my house and paid off the PCP which was 6.9% whereas the mortgage was 1.94%.

I bought a StopLock for the steering wheel, an immobiliser and an RF proof pouch for the key (you can turn off keyless opening on the MMI on the B9). The car already had the Audi factory tracker fitted.

I had my weak wooden fence replaced with a wall, make sure the car is always garaged and will fit an anti ram raid drive post soon.

My S4 was recovered a month later and 5 thieves arrested, although the car was trashed and I had already been paid by the insurance. Even so, I do worry about the RS4 being targeted for theft and if I think I am being followed, I don’t drive straight home, but go around the houses. I don’t leave the car on the drive any longer than necessary, but garage it pretty quickly. I think the longest it’s outside is when I wash it. It is a pain, but necessary.

I also worry about the car being scratched as it’s very shiny black! So it’s not as practical for me as the S4 was.

Now to the difference. Chalk and Cheese. The B9 is 450bhp 600nm torque. Although the Revo figures suggest around 450bhp and around 450nm torque, it feels nothing like the RS4. In fact I would say the S4 feels “flat” and underwhelming compared to the B9 RS4. My car has Dynamic everything including DRC and 275-20” wheels and the handling and grip is so much better than the S4 which I thought was good - perhaps in 2011 it was, but not compared to 2019.

So the plus points for the B9 RS4 are the looks, sound, electronics packages, handling, comfort & power and decent brakes. The fuel consumption is much better than the S4 too. The best I ever saw on my S4 was 32mpg on a run doing 60-65mph. The RS4 has returned 42mpg under the same conditions.
When it’s a few years old, the road tax will be cheaper too!
All in all it is a special car produced in limited numbers by Audi Sport, mostly due to cost. I think in the long term it will become a classic, one of the last full-on petrol sports estate cars?

On the negative side, it is more desirable to thieves, more expensive to buy and run (I’ve not spent any additional costs so far) but now I have driven it for 9 months, I wouldn’t want to swap it for an S4 and pay off the mortgage, I’d rather have fun with it now while we can before the government etc ban us from having any kind of motoring fun.

By all means get opinions from others on the forums who have experience of various models, but this is my opinion.
Had I made the wrong decision I would be extremely upset, but I am pleased to say that for me, I made the right choice and I am sure that If I did get the S4 that I originally went to look at, I would still be wanting the RS4 and probably wouldn’t be happy settling for the next best simply because of the initial cost. Smiles Per Gallon is what counts.

Good luck and whatever you end up getting, look after it the best you can. If you can afford a cheap run-around to go shopping or park at the train station and use the nice car for worthwhile trips, that’s what I recommend you do. I use my wife’s car for those kind of journeys when possible.

Thanks Paul that's really informative, the more I research the B9 the more I'm convinced it's 100% what I'd like.
The reality is that I'm possibly going to have to wait a little for depreciation to take more of an effect.

Though I did spot this https://www.autotrader.co.uk/classified ... 1065849301 which is more within my price range though it not having the black pack and the seat colour wasn't to my taste, though the wheels and Daytona grey is superb

Yes definitely, you wont be disappointed, I had a 2012 s4 fully loaded but now have a 2019 mythos black,sport edition and it's in a different league altogether.
Top

Ive been looking at them for a while, had one for the Weekend & loved it.

The B9 was & is worlds ahead, I missed the Boat early last summer when Audi pulled the plug due to WLTP

We onto a Macan GTS + Toy instead

Your comment on the B9 S4 to RS4 has endorsed my decision, as I didn’t bother trying the S4. I am extremely happy with my RS4 and long may it continue to deliver many smiles pee gallon.

Does that mean I should notice a difference moving from a, cough,cough 09 A4 2.0T when my new baby arrives in May ?
Top
Post Reply
16 posts

Users browsing this forum: No registered users and 19 guests

All logos and trademarks in this site are property of their respective owners. © 2002-2019 by RS246 Limited. All Rights Reserved